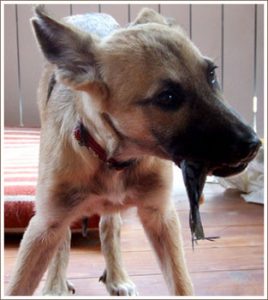 Did you know that historically a dog’s diet was always raw?

It wasn’t until the depression of the late 1920’s that the traditional meat, bones, offal and table scrap diet fed to dogs for centuries was abandoned when people had no choice but to eat these foods themselves, and instead began to feed dogs with stock and grain-based feed, to which they added extra protein and calcium in the form of what was basically fertiliser meat meal, blood and bone. This was the beginning of the enormous pet-food industry that we know today with grain producers, realising the profits to be made from their waste produce, began what has become the insidious (and damaging to pet health) modern pet food industry of today.

This new pet food was sold as “scientifically formulated” and “good for your pet”, yet the food was mainly cereal based, cooked at very high temperatures and finished with a cocktail of colorants, preservatives and dubious ‘vitamins’ in an attempt to replace the nutrients lost from the high temperatures used in the processing.

At this point, the pet food manufacturers re-wrote the scientific classification for dogs and started to change public perception by referring to dogs as omnivores, despite their carnassial teeth and lack of large flat molars for grinding up plant matter. The manufacturers went further; they started sponsoring the nutrition lectures in vet school, teaching student vets that dogs were omnivores. They gave lucrative sales margins to vets who carried their food, and so the corruption of our veterinary professionals began….

Being descendents from wolves, feeding a dog a steady diet of anything that is cooked, canned, dried or ground is simply unnatural for a dog, and over time, doing so puts a strain on the dog’s system. Such a chronic strain may often result in any number of the different kinds of health problems from which far too many dogs are suffering today; diseases that are now being referred to as “genetic”.

Yet it was convenient, no more pondering of what to feed that day, everyone loved the idea of simply opening a bag or can. The fast-food industry for dogs was born, and with it began the diet related health crisis of dogs that then swept our western world, dogs started to develop so many diet related illnesses that the veterinary industry boomed, yet still we carried on feeding the same food that was causing the problems in the first place.

This site is intended to give you, the reader, an overview to a more natural way of caring for your dog to provide better health and longevity.  We hope it is the first step to a different way of life for both your dog and your family and that you will go on to explore the subject in detail.  Knowledge is power, the more informed you are, the better choices you will be able to make for your dog.

We hope you enjoy the journey!

Disclaimer: Since we are unable to personally oversee or monitor the care and diet of your dog, we assume no responsibility or liability for the use of the information contained in this guide which is provided for general information purposes. Any information provided is not veterinary advice and should not be substituted for a consultation with a holistic veterinary professional. If you have any concerns about your dogs health, please contact your holistic veterinarian or other qualified professional immediately.